100 Years Since the UKs Biggest Explosion at Silvertown 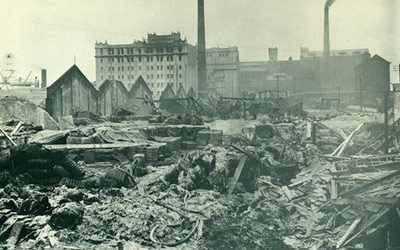 Today marks 100 years since the Silvertown explosion at the Royal Docks in London. It remains the largest ever explosion in the UK.

CGL have investigated this site and the area first as the Minoco Wharf development back in 2004 and now as part of the Royal Wharf residential development for Ballymore and as such the site history naturally figured strongly in our considerations on remediation and development recommendations.

An explosion in a munitions train caused fires and the destruction of the munitions factory on 19 January 1917 killing 73 people and injuring almost 500. It destroyed 900 houses and damaged 70,000 more properties. The explosion was so enormous it blew out windows in the Savoy and could be heard as far away as Sandringham and Southampton.