2017 Focus on Cycling in Yorkshire for CGL 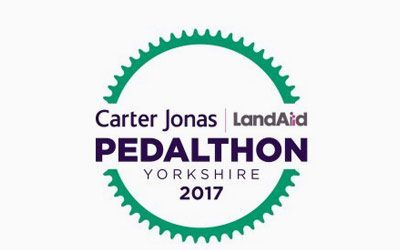 CGL will have a cycling team in the Carter Jonas LandAid Yorkshire Pedalthon again this year on 12th May to raise money for property industry charity, LandAid.

The Carter Jonas LandAid Pedalthon is a Tour de France legacy ride that brings together firms in the region’s property industry to the spectacular setting of Yorkshire for a tough challenge that supports a great cause.

LandAid supports disadvantaged and vulnerable youngsters in the UK and tackles homelessness.

Three years after hosting the Tour de France, the best of British, European and World cycling teams will return to the roads of Yorkshire.

The third Tour De Yorkshire takes place between 28 – 30th April. It is a three-day stage race starting in Bridlington and finishing in Sheffield.

CGL’s town of Harrogate will host the finish of stage two on Saturday 29th April. The second stage will follow a 122.5km (76 miles) route from Tadcaster via Knaresborough, Masham and Ripon. The action finishes along Parliament Street, as the opening stage of the 2014 Tour de France.

Richard Pennock, CGL Director commented “As a cyclist and someone active in the local business community I’m delighted Harrogate will be a big part of the Tour de Yorkshire again.  Last year’s race attracted two million spectators and generated £60m for the local economy. We’re also looking forward to the Carter Jonas Pedalthon in May which helps a great cause and builds connections with the many cyclists in the local property sector!”