Welcome to CGL’s GeoEngineering Blog page where our Digital Imagery Analyst, Dr. David Giles, will be sharing some of the many engineering geology, geohazard and geoenvironmental case studies, projects, and field sites that he has been involved in over his long career.

During this time David has accumulated a vast photo archive of many classic and interesting geo-sites, often returning to those locations year after year to log the geological and environmental change and record many construction projects from initial investigation to final construction.

On this blog, you will find examples of the effects of coastal processes, landslides, problematic soils, sinkholes, and ground dissolution along with classic Quaternary sites and construction projects including roads, tunnels, and dams. David’s career has taken him across the UK and into Europe, particularly France, where there are some fantastic geo-sites. He will also be showcasing some of his papers giving more background and context to some of the work that has been done.

The Malpasset Dam to the north of the ancient Roman town of Frejus began construction in 1952 with the works completing in 1954. On 2nd December 1959, it became the first arch abutment dam to catastrophically fail with over 600 such dams having previously been built. The failure caused the deaths of more than 400 people along with significant damage to the town and infrastructure downstream, flooding the valley all the way to the sea. The filling of the reservoir had been delayed for five years and 1959 saw it filled to design capacity for the first time. Initial analysis suggested that the dam failed through unforeseen ground conditions affecting the structure at the site. The timing of the failure was in a period where the disciplines of engineering geology and rock mechanics were in their infancy. This was significant in the early analysis as to why the dam failed. A major forensic investigation was initiated that concluded that there was no blame to be apportioned for this catastrophe. By modern standards and practice this would be seen in a very different light where the on-site geological conditions, although complex, would be considered as problematic requiring careful assessment feeding into the engineering design.

The dam was designed by André Coyne of Coyne and Bellier, a well-established and respected consultancy that still practices today, and was commissioned to impound the Reyran River to provide a water supply for local agriculture. The Reyran flowed in a wide valley over siltstones and sandstones of Carboniferous Coal Measures before entering a narrower valley cut into the gneissic terrain of the Tanneron Massif. The chosen site for the dam construction was within the gneiss which was crosscut with pegmatite lenses and intrusive dykes. Initial ground investigations considered that these rocks were sufficiently strong enough for a gravity dam foundation on a valley floor with very little alluvial cover. 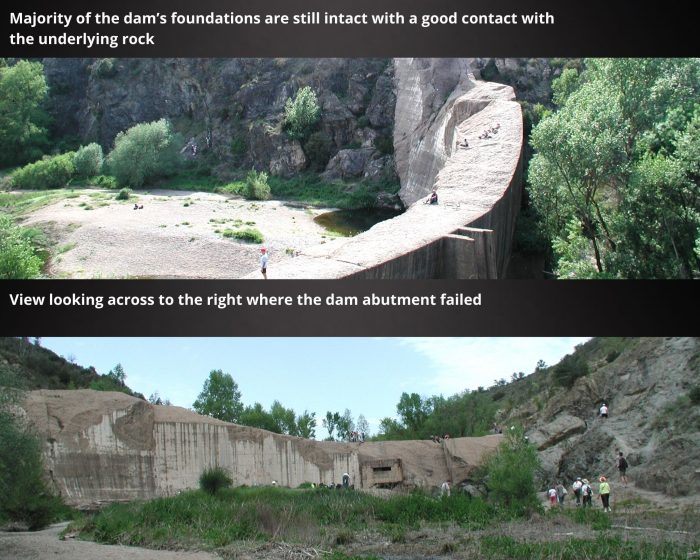 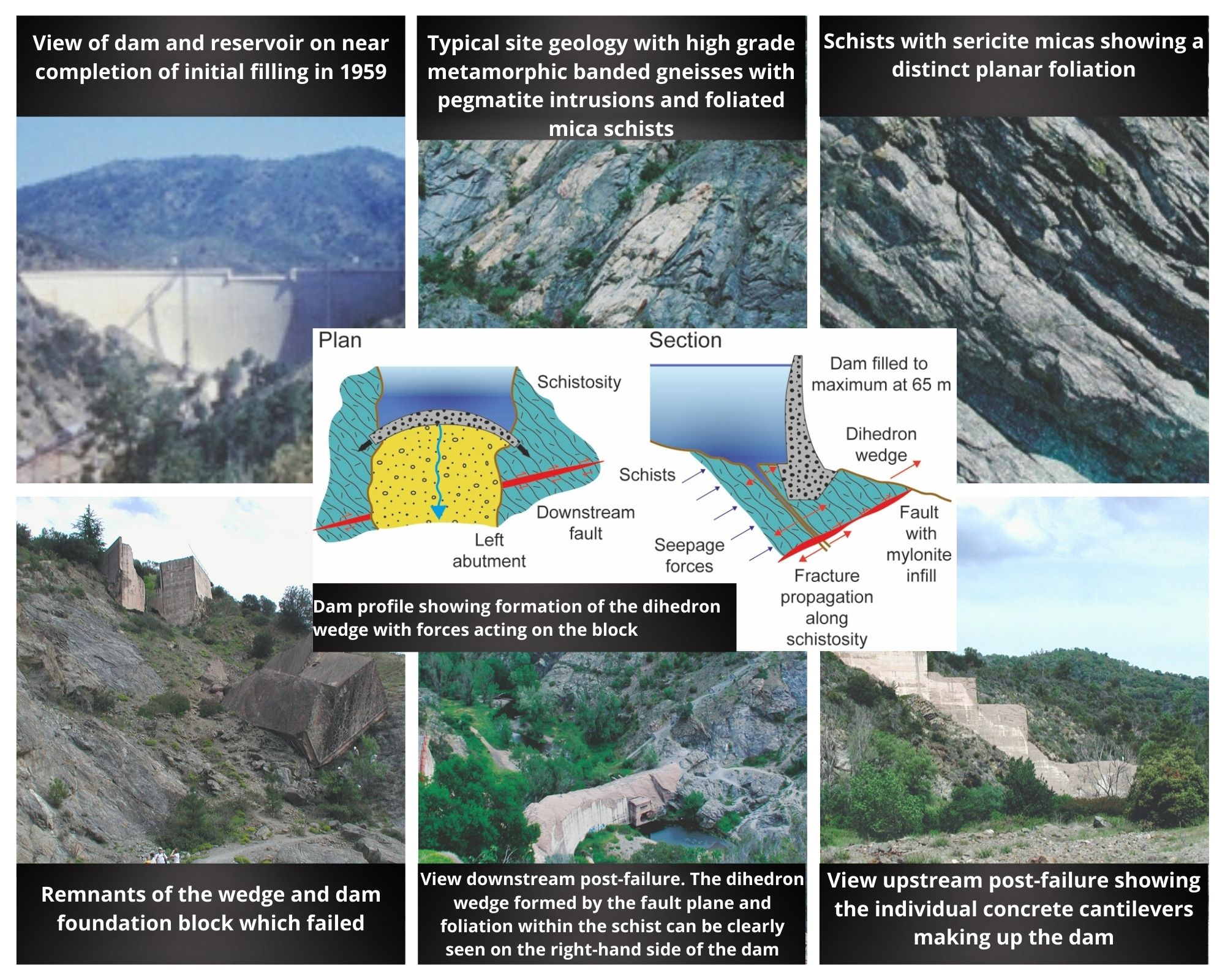 The Coastal Cliffs at Happisburgh, Norfolk

A classic site for appreciating glacial sediments together with the effects of prolonged coastal erosion. A 20 year photo archive demonstrates how this coastline has changed and some of the remediation work that has been put in place to mitigate this constant threat.

This tunnel had been recently excavated through steeply dipping Jurassic limestones and marls using drill and blast methods. I was able to track the construction from start to finish for a project with many engineering geological issues to address.

The 180 m long Chabrières tunnel is located on the RN85 Digne to Nice link road in the Alpes-de-Haute-Provence, France. A section of this route passed through a very narrow limestone gorge at the Clue de Chabrières. The carriageway at this section was extremely narrow, only 6m in places, and had to negotiate a large overhanging limestone abutment on one side with the gorge and fast-flowing River Asse on the other).

This road section presented other hazards including rock and debris falling from the steep, near-vertical, rock face above.  A tunnel was constructed cutting out the Clue bottleneck to improve traffic flow and increase overall road safety. I had visited this section of the road over many years and saw various slope stabilisation works undertaken to protect the carriageway. Ultimately a tunnel was chosen as the best long-term solution for this very problematic section through the gorge. To read more about this project, please see my paper in QJEGH (The Chabrières Tunnel, Alpes-de-Haute-Provence, France 2018)  The portal’s image was chosen to be the front cover of the Journal for their 50th anniversary! 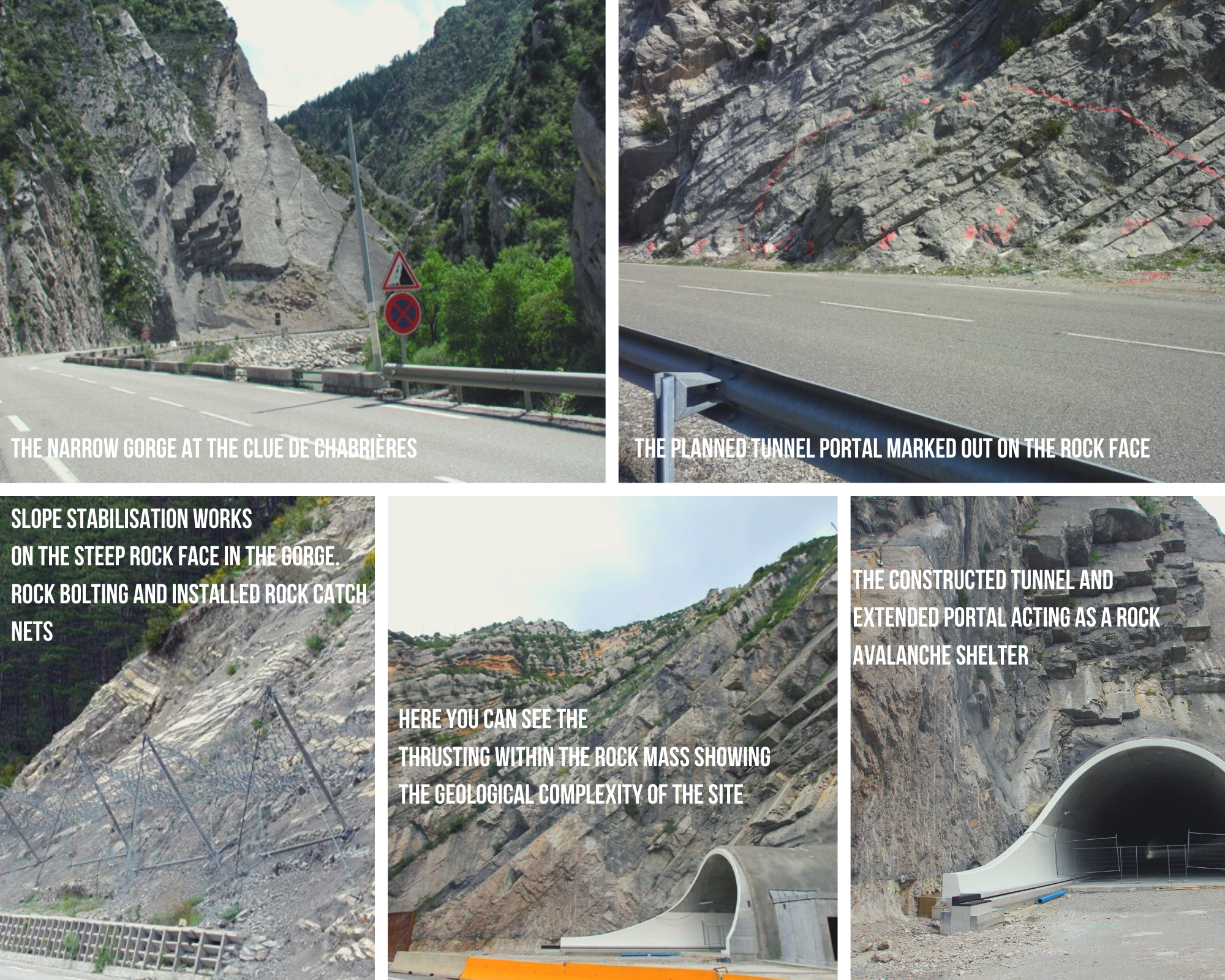 The Deep-Seated Gravitational Failure at Séchilienne near Grenoble, France

A major landslide on a mountain scale could completely dam the river valley below. Major monitoring and remediation have been undertaken to deal with this severe geological hazard.

Apart from being known for its large cathedral and fine breweries, Ripon is perhaps infamous for its geological problems, specifically from gypsum and anhydrite’s dissolution.

Gaciolacustrine deposits present some complex engineering challenges. The Trièves area to the south of Grenoble in France is a wide area once occupied by a former glacial lake and the chosen location for a major autoroute extension.

London Clay Landslides on the Isle of Sheppey

To some people, the Isle of Sheppey in Kent is significant for its fossil hauls, but for the applied geologists it is the location for spectacular coastal landslides in the London Clay Formation cliffs.

Quick Clay Related Landslides – Could they occur in the UK?

The recent tragic events in Gjerdrum village near Oslo, Norway have highlighted the highly problematic nature of “quick clay” behaving soils. The video below shows the aftermath of a quick clay related landslide that occurred on very low angle slopes due to the underlying soil liquefying. 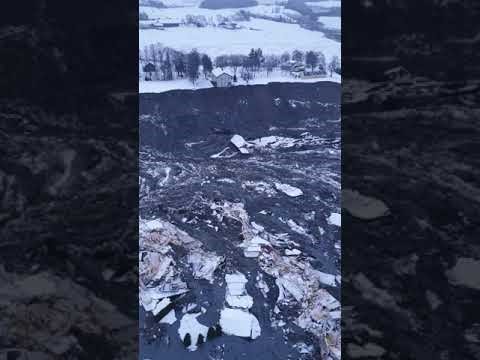 The term quick clay has been used to denote the behaviour of highly sensitive Quaternary marine clays that, due to post-depositional processes, have the tendency to change from a relatively stiff condition to a liquid mass when disturbed. On failure, these marine clays can rapidly mobilise into high-velocity flow slides and spread often completely liquefying in the process. 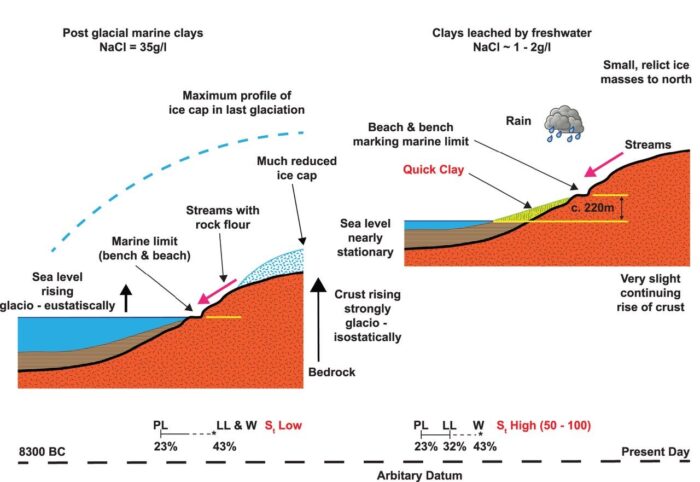 For a clay to be defined as potentially behaving as a quick clay in terms of its geotechnical parameters it must have a sensitivity (the ratio of undisturbed to remoulded shear strength) of greater than 30 together with a remoulded shear strength of less than 0.5 kPa. One of the key characteristics of fine grained sediments prone to quick clay behaviour is that the sediment is dominated by non-swelling minerals which give the material a low activity. This concept of activity considers the relationship between the plasticity index (IP) and the clay faction (<2 µm) of the sediment. Quick clay prone deposits are usually inactive with an activity less than 0.5. 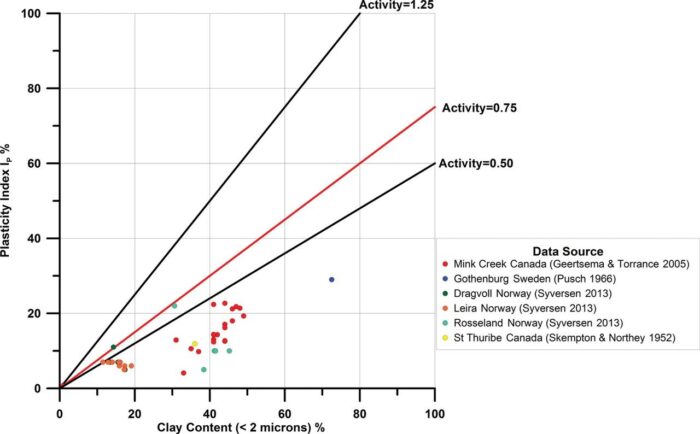 Numerous studies have been undertaken on quick clay landslides with a view to understanding and categorizing the failure mechanisms. Such clay failures have been observed either as retrogressive slides, developing relatively slowly, or as ‘flake-type’, spreading failures which fail instantly.

The state of stress that exists in the quick clay prior to instability was observed as a key factor in controlling the failure. When loading of these clays beyond a critical stress level occurs there is a tendency for a volume decrease to take place with a resulting pore pressure increase. To obtain an increase in the soil’s shear strength the effect of the increased mobilized effective internal angle of friction must be greater than the effective stress reduction due to the increase in porewater pressure. If a quick clay is loaded undrained beyond this critical stress level the porewater pressures will increase dramatically as the metastable ‘house of cards’ clay particle structure starts to collapse. This will result in a catastrophic decrease in shear strength. As a consequence of this process, failure takes place almost instantaneously, long before the internal angle of friction is fully mobilized. This dramatic failure of quick clay deposits is what accounts for the frequent loss of life due to these particular landslides. For the flake-like spreading failures to occur the initial stress levels in the quick clay deposits must be very close to the critical stress level. Any small increase of stress, due to loading, vibration or erosion, will result in a failure of a large area simultaneously. 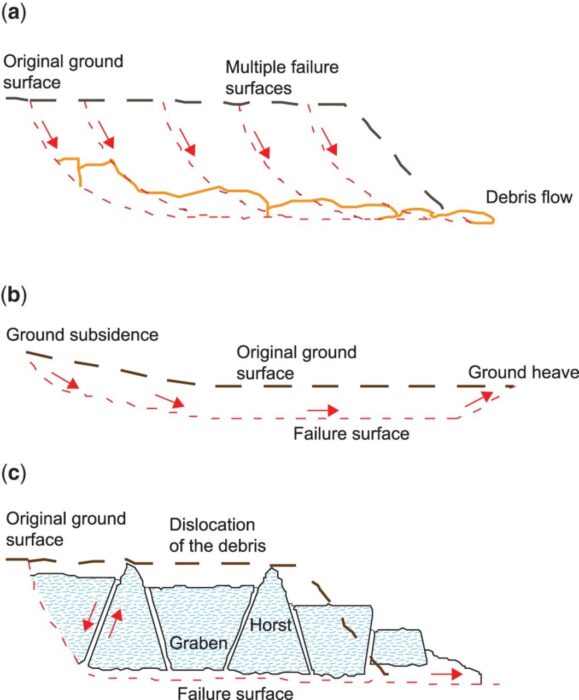 The presence of quick clays in the UK is unclear, but the Quaternary history of the British islands suggests that the precursor conditions for their formation could be present and should be considered when undertaking construction in the coastal zone. Various studies on post-glacial isostatic recovery and eustatic sea level adjustment indicate that parts of the UK coastal zone have been elevated above former sea levels; for example, over 40 m in northern Scotland. The possibility that former fine-grained marine sediments have subsequently been elevated above sea level and have been subject to weathering processes and potential pore water leaching potentially exists in these now onshore coastal areas. The uplifted zones will have experienced the pre- conditions for quick clay prone behaving sediments to have been developed.

In the area around Grangemouth in Scotland extensive late glacial fine-grained marine deposits can be encountered known locally as carse (Carse Clay Formation) which can be found up to elevations of 37 m AOD, the maximum level of the isostatically raised shoreline. The silts and clays of the carse have typically high moisture contents and have a 1 m plus firm weathered crust. Activity values from the late glacial silts and clays are in the region of 0.75, just on the typical quick clay defining boundary although there is discussion of these deposits being possibly tsunami related. 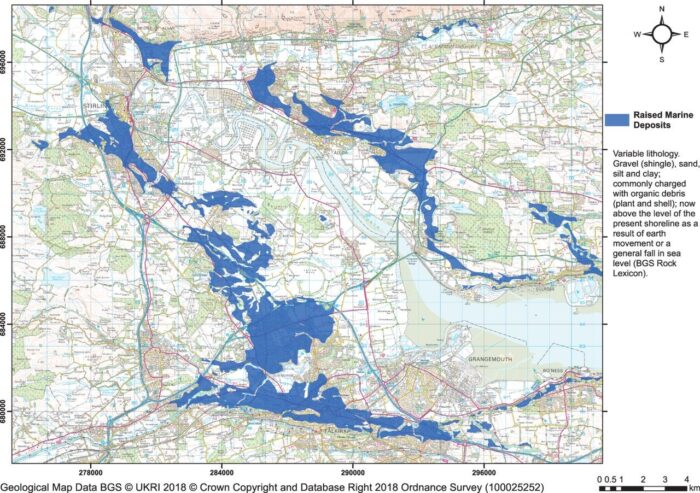 One of the most interesting potential UK sites for the presence of quick clay behaviour prone sediments was at the SERC Soft Clay Test Bed Site at Bothkennar, Scotland, which was fully described in the 1992 Géotechnique Symposium in Print. The site presented a remarkably uniform soft silty clay (Carse Clay Formation and Came Clay) which was considered to have been deposited under stable estuarine conditions between 8500 and 6000 BP. The site had been isostatically uplifted by at least 30 m with evidence of a 13 000 BP palaeo shoreline present. Clays at the site had a high undrained strength with a reported activity of 1.34 and sensitivity of about 5 but geotechnical testing on one of the Carse Clay Formation subdivisions (Came Clay) found interesting results. The mineralogical nature of the Came Clay was an illite-chlorite-rock flour mixture suggesting a low activity of around 0.5 placing it in the ‘quick clay’ potential domain but due to the presence of smectite (with its swelling potential) the activity values were pushed up to 1.25. The Bothkennar data set perhaps holds the answers to a possible UK quick clay?

Where encountered in the coastal zone former marine clays which have been isostatically uplifted above present-day sea levels present a considerable geohazard. Their ability to completely liquefy on disturbance or overloading produces large volume, high velocity landslides which pose a significant risk to life and property. The Quaternary conditions for quick clay development in the UK are certainly present yet there are very few candidate sites reported for such behaviour. For construction sites within the coastal zone which would have experienced marine depositional conditions within the Quaternary and that have been subsequently uplifted the possibility that quick clay behaving sediments may be present should be considered and should be tested for through the soils laboratory testing programme. The sensitivity and activity of any fine-grained sediments should be reported.

To see the full effects of a quick clay related landslide there is no better visual documentation than the video from the 1978 Rissa landslide in Norway (below). On the 29th of April 1978, a quick clay landslide devastated large areas of the rural district of Rissa mid-Norway. One person died whilst 13 farms; 2 homes, a cabin and a community centre were taken by the liquefying clay masses, all captured on cine film.