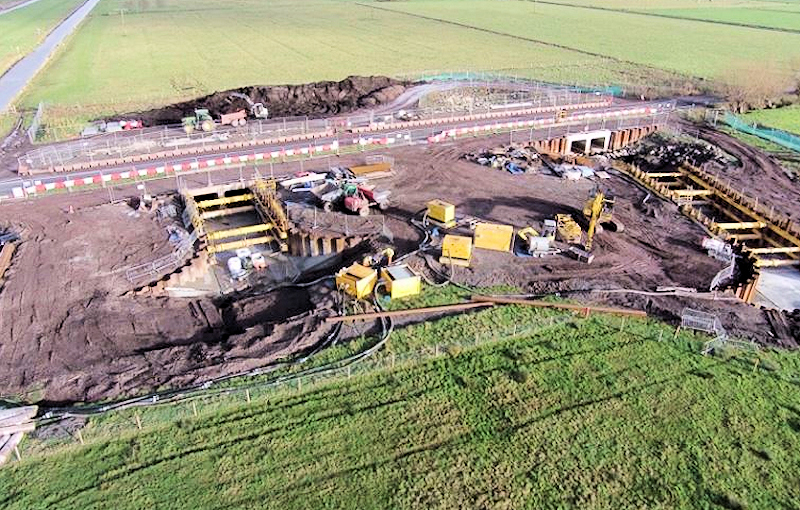 CGL was engaged by Skanska to undertake a series of temporary works designs to assist with the development of a flood alleviation scheme at Othery near Bridgwater. The site is crossed by the A372, which has acted as a dam to the water flow in historical flood events. Therefore it was proposed to widen the existing channels and construct a new channel beneath the A372 to reduce the future risk of major flood events on the Somerset Levels.

To enable the excavation of the new river channel, excavators and lorries were required to track across the site. The shallow ground conditions comprised some 5m of soft compressible pseudo-fibrous peat overlying alluvium with a shallow groundwater table, requiring a
working platform to be constructed.

CGL designed a working platform in accordance with BRE 470. This standard would normally require a stone thickness of some 1200mm, however due to the sensitive nature of the peat to settlement and bearing capacity failure, CGL recommended that a geogrid was incorporated which reduced the thickness of the working platform to 800mm.

Where the channels were to be realigned, it was proposed to maintain the flow of the existing channel. Therefore a temporary berm was required to be left insitu as the new channel was being excavated then removed on completion. The contractor required the berm to be
constructed out of the peat to minimise additional plant movements onsite and the width of the berm to be minimised to reduce the volume of soil to be removed on completion.

A finite element assessment was completed which modelled the effects of groundwater seepage through the peat and a sensitivity analysis was completed for drought and flood events to determine how the stability would be affected. On completion CGL designed a 12m wide berm formed at a gradient of 1:3. Given the sensitivity of the peat to failure, regular monitoring of the berm was carried
out to manage its stability and the health and safety risks.

A review of the original information provided from Skanska allowed CGL to value engineer a cost-effective solution which reduced the volume of stone and additional plant to be imported to site.