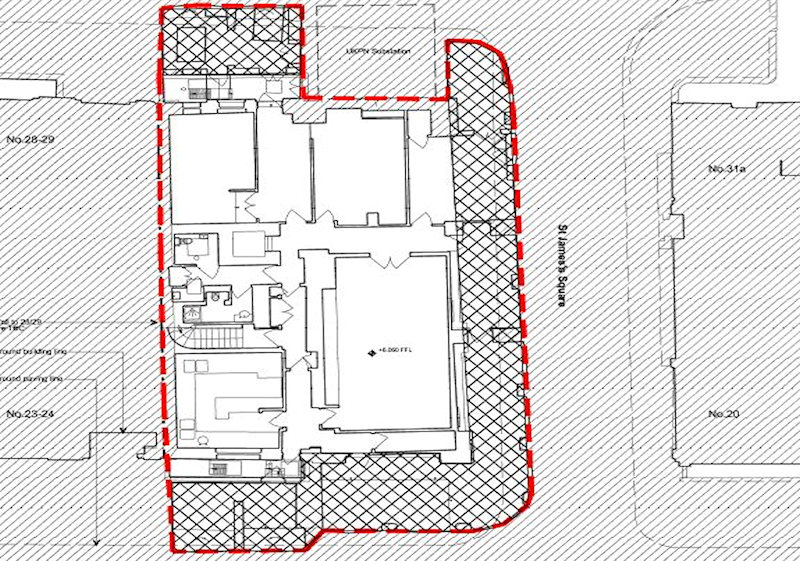 The property at 30 St James’s Square is to be redeveloped by demolishing the existing 5-storey building and the construction of a new 6-storey steel framed building while retaining the grade II listed façade.

CGL was engaged by structural engineers Price & Myers to provide a preliminary site investigation while the building was still occupied to provide an early stage assessment of the viability of the foundations being proposed for the new structure. The site lies in an area of complex ground conditions in London which have only been revealed in relatively recent years. CGL had prior experience of these complex ground conditions which include geological faults and drift filled hollows from the nearby site at 7-8 St James’s Square developed in 2014 to a similar level as proposed here. The potential for sudden variations in not only the thicknesses of the Made Ground but also the underlying recent geological deposits, Langley Silt and Terrace Gravels and the deeper surface of the older London Clay of the Eocene present risks to basement and shallow foundation construction.

CGL’s initial investigation included a limited number of window sample boreholes and foundation inspection pits through the existing basement while the building remained operational. The approach by experienced engineering geologists and geotechnical engineers working alongside the structural engineering team allowed the risks to be managed and disturbance to the building’s occupants minimised.

The outcome of this investigation was that CGL was able to demonstrate that the existing pad foundations would be insufficient for the new 6-storey building and planned loading profiles. To evaluate different foundation options CGL undertook settlement analyses of raft foundation options using sophisticated analysis software which showed that with a raft foundation significant total and differential settlements would occur under the new loading regimes that would preclude this solution.

As a consequence of this early stage analysis it became clear piled foundations were the only viable option. CGL initiated the second stage of the investigation involving deeper boreholes to confirm and corroborated the results with accumulated in-house historical data available to CGL. This information was then used to refine pile designs and inform the tendering process.