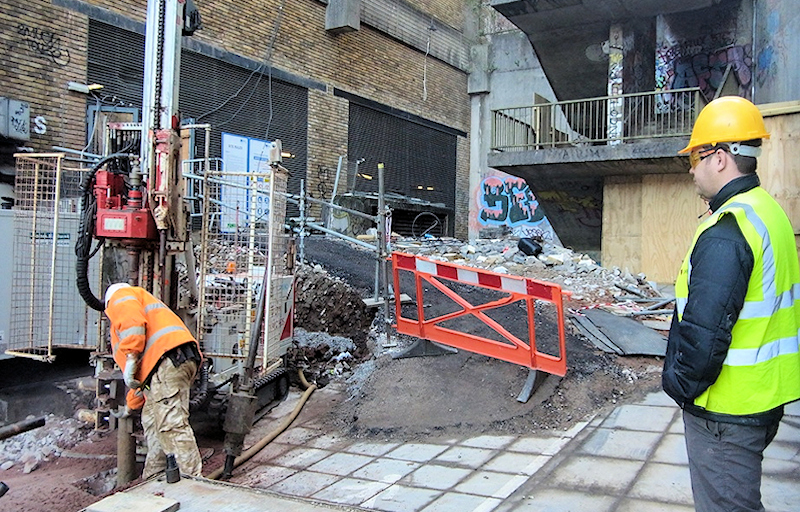 CGL was engaged by the RG Group to carry out a site investigation at their site located off Trenchard Street, Bristol. The site was formerly occupied by the O₂ Academy music venue and the Bristol Entertainment Centre which included a multi-storey carpark and ice skating rink. The proposed development involved demolition of the existing structures and the construction of a seven-storey residential building, a courtyard and a single commercial unit.

The site investigation was supervised and directed by an engineer from CGL. It expected to encounter a mantle of Made Ground overlying superficial Tidal Flat Deposits which in turn was overlying the Carboniferous age Quartzitic Sandstone Formation.

At the time of the investigation demolition works were being undertaken which restricted access to parts of the site. Predetermined exploratory hole locations had to be moved to accommodate this work through collaboration with the client and the demolition contractor.

The investigation included four rotary cored boreholes terminating in competent bedrock. Two windowless sample boreholes were also undertaken within a confined space which limited the use of a larger drilling rig. Three dynamic probe tests were also undertaken to provide further information on the anticipated depth to bedrock in the south-west and south-east of the site.

Following the intrusive investigation representative samples were sent to undergo further geotechnical and geoenvironmental laboratory testing. On completion three of the boreholes had gas/groundwater monitoring wells with response zones installed within both the underlying Tidal Flat Deposits and the Quartzitic Sandstone Formation. The site investigation was followed by a single gas/groundwater monitoring visit which showed a low risk from ground gas hazards.

The geoenvironmental testing showed that the near surface soils did not pose a risk to human health and remedial action at the site was not considered necessary.

It was recommended that the proposed structure be founded within the Quartzitic Sandstone Formation based on the anticipated loadings of the proposed structure. Because of CGL’s approach to the ground investigation, we were able to show the developer that this geological formation was found at variable depths and could therefore adopt a range of foundation types to suit the site-specific conditions, with shallow strip foundations being possible in some areas where competent strata had been identified. This reduced the requirement for piled foundations across the entire site, resulting in an overall cost saving for the client.